I am going to share a couple of little anecdotes from a slightly bizarre day I had while we were travelling Sri Lanka.

We were staying in Kandy and had hired a driver for the day to take us to Dambulla rock temples in the morning, followed by a visit to a spice garden in the afternoon.

We arrived at Dambulla. The rock temples are carved into a mountain rock face and are one of the oldest sites of Buddhist temples in the region. Indeed, they are incredible to behold. Reaching the temples, requires a somewhat generous slug up hundreds of steps, punctuated by level terraces upon which to catch your breath. It was on one of these terraces that we happened upon a large troupe of monkeys. 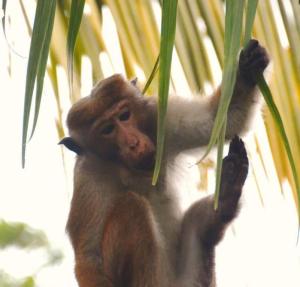 We love monkeys. And they were happily cavorting among tourists without a care. I stopped, entranced by a small group of infants, playing happily together, gambolling and leaping along the walls and steps, a really delightful moment. At this point, as I gazed misty eyed at the monkeys, in such a heavenly place and surrounded by such a landscape, I wondered if life could ever be any better. It was truly magical………..

My attention then turned to another monkey, sitting just a few feet away from me. I watched on, as a second monkey sauntered over, mounted the first monkey and proceeded to mate with it. I blushed.

The second monkey then clambered off the first monkey and sat, legs akimbo, looked straight at me and proceeded to pull the residual semen from its willy in long stringy globules and ate it.

The afternoon was spent at a delightful spice garden.

We were guided through the gardens by a lovely chap, who carefully explained the properties of black pepper, cocoa, cinnamon, turmeric and ginger – in fact so many wondrous plants which were at our fingertips to pick, taste and smell. It was a gloriously sensory experience. We had a little neck massage, using oils blended with the spices. We had some chai, infused with the spices. It was lovely.

The guide then took us to the sandalwood plants. I love sandalwood, and wear this fragrance quite frequently. He took time to explain the considerable properties that sandalwood has for medicine and healing. Excellent for digestive ailments and for purifying the blood.

He went on to explain the incredible properties it has for the skin – for rejuvenation and anti-ageing.

I intercepted him, in a jokey manner.

He turned to me. There was a pause.

And then added seriously,